Specialising in paper-cutting and screen printing Ryan's artwork has been published in the likes of Vogue, Elle and Stylist. He has collaborated with Fashion designer Paul Smith, illustrated book and album covers and now Rob Ryan embarks upon a new direction in his latest exhibition 'Sculpture 001'.

The show consists of a single exhibit, a 9 Foot tall model of a volcano.

The crater at the crown of the sculpture is accessible by a set of stairs that allows the viewer to look within and view the sculpture's interior.

We managed to nab 30 mins with Rob Ryan to have a chat over coffee in his studio.

Hi Rob, thank you for finding the time to have a chat with us in what we imagine to be a very busy time here in the Ryan Town HQ in the run up to the opening of Sculpture 001 next week! To say we are very excited would be an understatement! 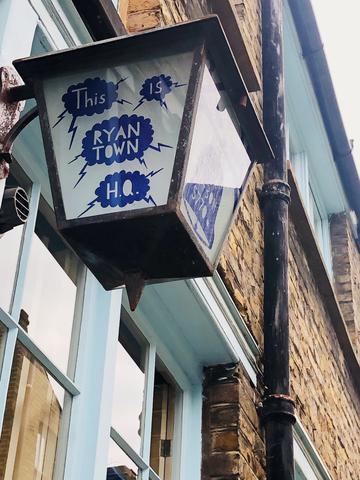 We first spoke about this project over a year ago. How long have you been wanting to undertake a project like this?

It's been in the back of my mind for a while. For years Ive been making these ceramic tiles and had been thinking of taking that a stage further by making a sort of fountain. That hasn't happened yet, but that was what I was planning a year ago.

For the last few years I've been making pictures of volcanoes and, I don't know why, but I thought I'd like to make one, well obviously not a REAL one, but my own version of one.

This is the first time you are doing a sculptural piece - how did you approach creating this magnificent (it really is quite magnificent we can't wait for you to see it!) sculpture? We imagine it's quite different to the approach you take on your classic paper cut outs.

In my work, which has always been 2D, I'm always very much in control. In fact, I'm pretty sure what the picture is going to look like at the end before I have even started it. This sculpture was a whole different matter ! The ideas that I had were fairly loose, I had an idea of what it MIGHT be - but I wasn't sure if it would work - some of it didn't, I had to change course along the way and follow another route. How it looks now is nothing like how it started in my head.
For someone like me who likes to be in control, this uncertainty can be terrifying yet on the other hand invigorating. To work improvisationaly is definitely out of my comfort zone, but now I'm beginning  to learn the value in it, and I hope the things I've learnt in the past few months will help me in my future work.

SCULPTURE 001 COMING TOGETHER IN ROB'S STUDIO.

What was the intention for undertaking this sculptural project?

My main intention was just to get something made and exhibitit ! Whatever it turned out to be ! I guess, as my first 3D project I did start off kind of BIG but you have throw yourself in at the deep end sometimes just to put yourself out there !

How do you feel your work has evolved since you first started your career as an artist?

The evolution of my work has been slow and steady, I think the biggest step for me was writing longer story books. I think I'm seeing myself now as much a storyteller as an artist and this sculpture to me is just a way of telling another story.

The exhibition is called Sculpture 001 can we expect more sculpture from Rob Ryan in the future?

Well I still want to make that fountain !

We will process the personal data you have supplied to communicate with you in accordance with our Privacy Policy. You can unsubscribe or change your preferences at any time by clicking the link in our emails.